Cryptocurrency can be defined as a type of digital asset. Because every one of its transactions is highly encrypted, the moniker is derived from how safe the trades are. Contrary to traditional currencies, which are regulated and governed by a central body, it is decentralized in nature. Cryptocurrencies have a limited supply and are occasionally compared to precious metals like gold and silver.

Blockchain is a technology that several cryptocurrencies utilize to manage and record transactions. Since numerous entities keep identical transaction records, it is incredibly secure for your investments.

Incredibly, the market for cryptocurrencies has been valued at over a trillion dollars. There are over 10,000 cryptocurrencies listed, and this figure has a capitalization of around $650 billion, Bitcoin owns the largest share of this, followed by Ethereum and Tether.

Cryptocurrencies are becoming more widely accepted per the above.

When the globe realized there were issues with the current banking institutions following the 2008 crisis, bitcoin was born as a gold rush of potential. It was the first cryptocurrency created using blockchain technology, and it may have altered how people viewed money. Forbes selected Bitcoin as the top investment in 2013 Today, everyone is familiar with it.

Bitcoin is peer-to-peer (P2P), which means there is no middleman (like a bank or credit card agency) and it has a low transaction fee in addition to being very secure in nature.

It is quick and completely transparent; for example, each Bitcoin transaction you perform is recorded on a public ledger that is open to everyone. It cannot be fabricated or imitated. Because blockchain transactions are also irreversible, the likelihood of fraud is significantly lower and your investments are much safer.

0Shares
Previous PostWhere to Buy and Sell Bitcoin With Mobile Money in GhanaNext PostHow is crypto and blockchain adoption progressing in Africa? 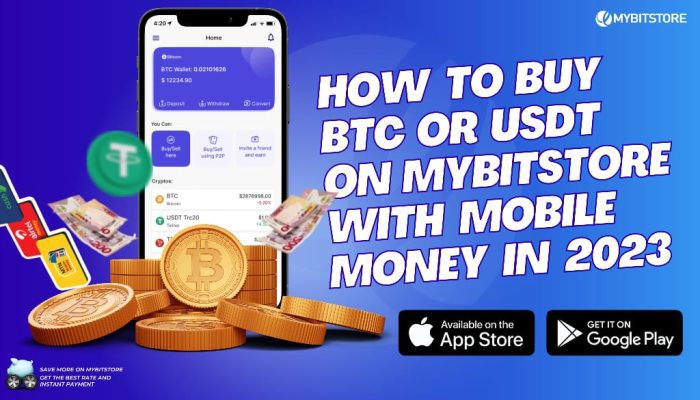 Where to Buy and Sell Bitcoin With Mobile Money in Ghana